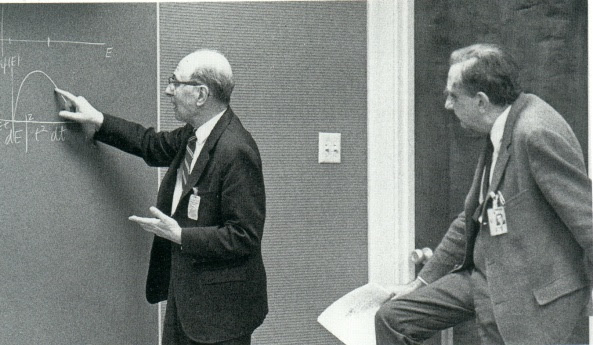 Edward Teller listens as Eugene Wigner explain a theoretical physics problem in Hungarian
Truth can come from people we don't like.  Edward Teller achieved a form of immortality in Peter Sellers satiric portrail of a Teller like figure in the movie Dr. Stranglove.  Teller who was in reality a flawed, complex, and compelling figure, was no Dr. Strangelove, bent on a nuclear war. Teller worried about nuclear winter, and even his most questionable idea, the Star Wars scheme he sold to Ronald Reagan, was intended to prevent the disasterous effects of nuclear war.   Teller shared with Alvin Weinberg concerns about nuclear safety, the problems of carbon-dioxide and global warming, and future sources of energy.
In December 1957 Edward Teller was invited to address the Annual meeting of the American Chemical Society. Teller was at the height of his fame. He was an honest to God celebrity, with reporters at his side, jotting down his comments, photographers snapping his picture, and as disgusting as it might seem now, women volunteering to sleep with him on the basis of his fame. (I know this because a beautify but wayward woman once describe an encounter with Teller to me.  She would have slept with Teller had he consented to the arrangement.)  He was referred to in the press as the Father of the "H-Bomb." He was also a darling of the American right-wing. No doubt the ACS thought by getting Teller to speak, they had achieved some coup. They must have been a little bit bewildered then when Teller started to talk about carbon dioxide and global climate. Teller told the assembled chemists that continued burning of carbon based fuels would increase the amount of CO2 in the atmosphere, eventually warming the planet to the extent that the polar ice caps would melt, and the resulting rise in sea level would submerge costal cities under water.

When Teller talked about destroying the Russians with H-Bombs, the press, Congress, presidents listened, and beautiful women contemplated sleeping with him. But Teller's warnings about CO2 and global warming received little attention that day. Teller, for all his fame was a pariah within the nuclear research community.

In Oak Ridge, where I grew up, Teller was intensely disliked by the scientific community. The problem stemmed from a 28 April 1954, hearing by an AEC board, in which Teller was asked to testify about J. Robert Oppenheimer's Security Clearance. Oppenheimer had opposed the development of the hydrogen bomb, and Teller had suggested to the AEC before the hearing that the charges against Oppenheimer to include his opposition to the the development of the hydrogen bomb. For Teller that was even more personal. Oppenheimer had chosen Hans Bethe, rather than Teller, to head the theoretical division at Los Alomos during World War 2. After that, the enraged Teller refused to cooperate with work on the atomic bomb, so Oppenheimer assigned to the research task of figuring out the more distant H-Bomb.
During the AEC security hearing, Teller questioned Oppenheimer's "wisdom and judgment, . ." No doubt his doubt about Oppenheimer "wisdom and judgment" was based on Oppenheimer's choice of Bethe rather than Teller. Teller was also enraged by Oppenheimer's opposition to the H Bomb. Thus when asked about his view on the security risk posed by Oppenheimer, Teller responded that he had often seen Teller act "in a way which for me was exceedingly hard to understand ... To this extent I feel that I would like to see the vital interests of this country in hands which I understand better, and therefore trust more." Teller added that it "would be wiser not to grant clearance."

In a crowning act of infamy, as he left the room, Teller offered his hand to Oppenheimer and muttered the words, "I'm sorry." Teller was in the view of many Oak Ridge scientist, nothing short of a Judas Iscariot. No one was going to pay attention to what Teller had to say in 1957, but by 1971, Teller's 1957 ACS speech had been forgotten, and the story about global warming brought about by CO2 emissions was spreading through ORNL until it came to Weinberg's attention.

Teller's reputation was at its height somewhat exaggerated. There is no doubt that he was wrong more often than he was right. During the development of the H-Bomb Teller barked up every wrong tree on the block. The successful concept did not come from Teller, it came from Stanislaw Ulam, a Polish mathematician. Teller worked out the details and took the credit. As late as 1999, Teller told Scientific American:

"I contributed; Ulam did not. I'm sorry I had to answer it in this abrupt way. Ulam was rightly dissatisfied with an old approach. He came to me with a part of an idea which I already had worked out and difficulty getting people to listen to. He was willing to sign a paper. When it then came to defending that paper and really putting work into it, he refused. He said, 'I don't believe in it.'

Teller was a scientist who solved problems by dint of persistence. No one should doubt Teller's brilliance, but he usually made several bad guesses before he came up with a good solution to the problem he was working on. Ronald Reagan bought into Teller's Star Wars concept, even though it was somewhat less than half baked. The Technology for the Star Wars concepts was years away from maturity, the research was extremely expensive and much was likely to lead to no good end, implementation, would have been exceedingly expensive, and the cold war was to end far before the project had any hope of achieving success. It is a singular evidence of what a bad idea Star Wars was, that George W, Bush trued to revive the idea during his second administration. Never the less on that day in December 1957 when he spoke to the ACS about CO2 and global warming, Edward Teller, was undoubtedly right.   It was almost fifteen years before Teller's message got to Oak Ridge.

Teller also had early and significant concerns about reactor safety.  He participated in the development of American reactor safety standards while chairing the AEC Reactor Safeguard Committee in the late 1940s. His interest in the development of a safe, meltdown proof reactor lead to the creation of General Atomics in the 1950's.
Teller was a scientific radical in that he tried to solve every problem by seeking its root.    Livermore physicist Neal Snyderman commented, “Edward sought to understand everything from a fundamental level.” Teller had an early interest in the molten salt reactor, before he left Los Alomos he encouraged its development there. No doubt the radical Teller understood the elegant simplicity of the molten salt concept, and appreciated its significant safety features.

When he died, Edward Teller was working with Lawrence Livermore National Laboratory physicist Ralph Moir, on one last paper titled "Thorium-Fueled Underground Power Plant Based on Molten Salt Technology." Teller died before the paper was completed but it was his last project, and Moir brought it faithfully to conclusion after Teller's death.

The abstract to the Teller Moir paper stated:
"This paper addresses the problems posed by running out of oil and gas supplies and the environmental problems that are due to greenhouse gases by suggesting the use of the energy available in the resource thorium, which is much more plentiful than the conventional nuclear fuel uranium. We propose the burning of this thorium dissolved as afluoride in molten salt in the minimum viscosity mixture ofLiF and BeF[2] together with a small amount of [235]U or plutonium fluoride to initiate the process to be located at least 10 m underground. The fission products could be stored at the same underground location. With graphite replacement or new cores and with the liquid fuel transferred to the new cores periodically, the power plant could operate for up to 200 yr with no transport of fissile material to the reactor or of wastes from the reactor during this period. Advantages that include utilization of,an abundant fuel, inaccessibility of that fuel to terrorists or for diversion to weapons use, together with good economics and safety features such as an underground location will diminish public concerns. We call for the construction of a small prototype thorium-burning reactor."
Posted by Charles Barton at 7:25 AM

Ah, Teller. I think you do a great job here of describing this flawed, and vitally important figure in history. Although there's some debate about how much Strangelove is based on Teller- the character seems to be part Edward Teller, part Herman Kahn, and part Werner von Braun. Kubrick met with Kahn when he was working on the film, but Kahn himself was very different in character and appearance from Strangelove. Both Teller and Kahn were of Jewish background, so the Nazi connection in the film is particularly inappropriate. Given his Nazi past (which he lamely excused by explaining that he joined the Party for purely mercenary reasons), von Braun is the most morally problematic one of the three. I personally would be hesitant to describe any of the three as "the real Dr. Strangelove"- it really isn't fair.

A lot of solar scientist think we are headed for a little ice age. Given the temperature stall of the last decade and the precipitous drop this winter they might be right.

We may be headed for a Dalton Minimum in sun spots. So far the next cycle is late. Only a few months so far. If it is a couple of years late we might need to be concerned.

In other words. The science is not settled. And the computer models are not so hot.

It was not Teller's hypothesis, the CO2-effects on world's temperature, but from Swante Arrhenius 1896. And the hypothesis is falsified by theory and reality.

Konrad, no one has claimed that Teller invented the theory. And if you believe that it has been disproven, I am sure you find that belief comforting.

Yes Teller was a visionary who foresaw effects from burning "fossil" fuels. He saw global warming when others were talking of the coming ice age. He felt Robert Oppenheimer was a disturbed man working against his development of the H-bomb or "super." He thought revocation of Oppenheimer's security clearance (a day before it was to expire anyway) was prudent, and he was vilified for it the rest of his life by those who thought Oppenheimer was God. Turns out he was right about Oppenheimer, a schizophrenic and active communist party member while he ran the Manhattan Project; a position he was given by lying to EOL by promising to stay out of his typical "left wing" politics for the duration. Oppenheimer's communist party association is proven beyond a shadow of a doubt by Gregg Harkin in his book "Brotherhood of the Bomb."