Alvin Weinberg invented and patented the Light Water Reactor. My father made an important contribution to its development. Both Dr. Weinberg and my father, like other scientist they worked with, never regarded the LWR as the best way to make nuclear power.

Light Water Reactors are not very efficient producers of energy. Although potentially 100% of uranium could be either burned as nuclear fuel, or converted to nuclear fuel, only a tiny fraction, less than 1% of the energy locked in uranium is released inside light water reactors. U-235 is the primary fuel of light water reactors, and only 0.7% of natural Uranium is U-235. Because the normal hydrogen in light water tends to consume non-trivial amounts of neutrons in reactors, the U-235 content of nuclear fuel has to be increased to 3% or even 5% of the reactor uranium. The enrichment process requires large amounts of energy.

First, because of the nature of the uranium enrichment process, nearly 30% of the U-235 present in natural uranium does not get included in the enrichment product. So 30% of the potential energy of the U-235 present in natural uranium never makes it to a reactor. Some breeding of U-238 takes place in inside a reactor. The result close to 3% of the U-238 is converted into reactor-grade plutonium. Now reactor-grade plutonium is not very good nuclear fuel in a thermal-spectrum reactor. It does not burn well in LWRs, and when the reactivity of the fuel can no longer support a chain reaction inside a light water reactor, nearly 20% of it is left. Another 12% 27% of the original U-235 is left.

Thus light-water reactors only extract about 0.6% of the energy present in natural uranium. The rest of the energy goes into two piles. One marked “Depleted Uranium”, and the other marked “spent reactor fuel”. “Spent reactor fuel”, ironically contains about as much U-235 as natural uranium. The system of electrical generation in Light Water Reactors is to place the reactor inside a high-pressure vessel, heat water with it, turn the hot water into steam (in a BWR) or use the hot water to make steam (in a PWR), and run a turbine with it. The turbine then turns a generator, which produces electricity. This whole, rather complicated system only turns about 1/3rd of the heat produced in a LWR into electricity. Thus 70% of the energy captured by the reactor is lost as waste heat. So of the energy present in natural uranium, 0.2% gets converted into electricity, 99.8% of the energy gets lost.

The light-water reactor system is extraordinarily wasteful in terms of energy. It is also wasteful in terms of uranium. In order to make LWR fuel, 200 pounds of natural uranium gets depleted. 19 pounds of that uranium can go back into a reactor, so over 90% of mined uranium never goes into a reactor. Of those 19 pounds of depleted uranium – almost all U-238 – that goes into a reactor, 18 ½ pounds comes out unchanged. Such is the power generated by splitting the atom, that by using only a very small amount of its potential energy, very useful work gets done. 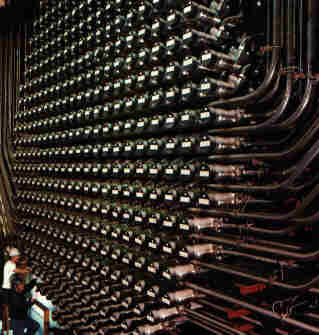 It is clear then that the light-water reactor, a technology that was advanced in the late 1940's and early 1950's primarily for military use, is very inefficient at the task of extracting energy from uranium, and converting it into electricity. Only 0.2%, that is one five hundredth (1/500) of the energy that could potentially be liberated from uranium by the nuclear process, is converted into electricity by the light-water reactor. The liquid-fluoride thorium reactor (LFTR) can do much better than this.
Posted by Charles Barton at 8:56 AM

“Spent reactor fuel, ironically contains almost as much U-235 as natural uranium."

I am not sure where my figures came from, but I am going to revise accodringly.

The light water reactor is far from perfection but it's still better than coal on its best day!

Stephen, a Model T Ford was better than a horse and buggy, but do you want to drive a model T Ford, if a better car is possible?