Dan Yurman has an interesting post on the Hyperion Reactor project today. The Hyperion uses several strategies to lower cost. It is designed to be factory produced as a unit. It is small enough to be transported by truck or rail. It is a relatively simple design, which simplifies manufacture and lowers labor and parts cost. It uses a lead-bismuth coolant, that will not boil at reactor operating temperature, thus no pressure vessel is needed. Rather than design an elaborate above ground structure, the Hyperion designers have taken a "dig a hole, stick reactor in" approach to site development. This simple approach provides superior safety and protection from nuclear terrorism than the massive above ground containment domes of conventional reactors. Digging a hole is of course much cheaper and takes far less time than building a massive containment dome. The Hyperion will be sealed, and the reactor will be fueled with HEU, so it will not need a fuel charge for period of from 5 to 15 years. A secondary coolant loop, will be connected to a steam turbine,. A small prefabricated structure can hold the turbine and it can double for the security detail headquarters, and house the computers that will monitor the reactor and security sensors. 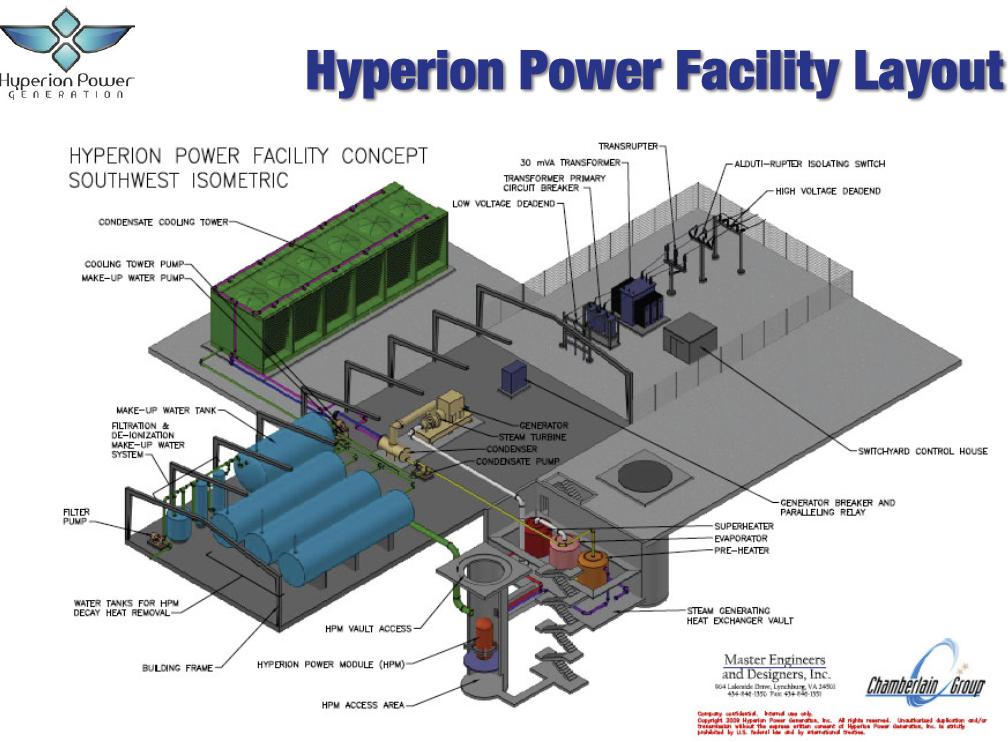 Hyperion estimates that the whole thing will cost from $2000 to $3000 per watt, a cost that would be competitive with windmills. Unlike windmills the Hyperion will produce power very reliably and will have a capacity factor of 1 until it runs out of fuel, which will take from 5 to 15 years. At 15 years the Hyperion would be approaching the natural lifespan of wind generators. The Hyperion would produce up to 5 times the electricity that five 5MW windmills would produce during a 15 year run, and the Hyperion need not sit at the end of a long high voltage transmission line. It is safe enough to sit down the street from your house, although having the security guards come over to borrow sugar for their tea all of the time might prove a headache. After the Hyperion runs out of fuel, the Hyperion company will dig it up and ship it back to the factory to be refurbished and refueled.

Making the Hyperion plan work will require a lot of capitol, and there is a risk. Much of the Hyperion plan can be adapted for LFTR. LFTRs could be designed to be as small as the Hyperion, but LFTR cores, and other major parts are truck transportable in much larger size. In fact a 400 MWe LFTR can be truck transported in several sections. Like the Hyperion, the LFTR is quite simple, in fact the LFTR is simpler. Indeed the manufacturing cost of a 400 MWe LFTR might not be higher than the manufacturing cost of a 25MWe Hyperion. Unlike the Hyperion, the LFTR would not create a long term toxic residue, and it could be refueled during its operations. Refueling the LFTR would cost less than refueling a Hyperion, because it fueling involves the use of ultra cheap thorium, rather than relatively expensive highly enriched Uranium. The LFTr would be more proliferation proof, would cost less to build, and less to own, It would last for at least 30 years, If the Hyperion costs from $2000 to $3000 per kW (in the fine print it says "over night price" and that does not make the Hyperion such a great bargain), the LFTR might well cost half that price. And with an anticipated lifespan, the LFTR would produce several times the amount of electricity a Hyperion would produce during its lifespan. Like the Hyperion the LFTR core could be buried and thus would not require an expensive housing. Thus LFTR owners would receive several times the revenue the Hyperion owner would, with similar costs for a much higher generation capacity and longer lifespan. In short the Hyperion would not last long on the market if a LFTR showed up as competition.
Update: I commented on Dan's post,

Like Martin Luther King, Hyperion has seen the promised land, but they may not get there. Los Alamos never was a great reactor design shop, and the viewpoint that if it fizzled as an atomic bomb, it must make a great reactor may not be the brightest idea around.

Posted by Charles Barton at 5:19 PM

Alex you are right but hay, what is a factor of a thousand among friends? Correction made, but also a note about the fine print on the $2000 to $3000 per kW price.

Charles, this blob has been picked up by Nuclear Energy Wire. I made a comment so it is now a topic for discussion on Topix Nuclear Energy News. I note that a proponent of IFR got a big spread in Esquire. I think that Esquire readers would benefit from a comparison of LFTR with both IFR and Hyperion. Thanks for your blogs. John Tjostem

I just don't know enough about the Hyperion design but generally anything requiring HEU that is non-military is a non-starter at NRC. How does Hyperion get around that?

The requirement to operate for a multi year period without refueling, necessitates the HEU, it is however, not so enriched that you could make a bomb from it (19%). The more I learn the worse the plan seems, however.

I read a lot of blog comments that are based on ignorance: ignorance of what the labs such as Los Alamos National Laboratory have achieved and is working on today, ignorance of what the NRC intends to do to accommodate SMRs (Small Modular Reactors), and more. You can all talk about how something is not going to work, but you naysayers are not exactly informed on the latest and greatest. You are not on the inside of SMR companies and you are not on the inside of the NRC. Why don't you give innovation a chance instead of being like the candle-makers who didn't want to see electricity come to fruition?
No wonder it took science thousands of years to get where we are today -- people were constantly saying "it can't be done." Well, you cavemen, that's what they said about everything else humanity has achieved.

Insider, we have already witnessed a a major change in the Hyperion design, with the original Los Alamos concept seemingly thrown out the window. You appear to have a stake in the endeavor, and in Los Alamos reactor design skills, but skepticism about the original Hyperion concept, which was developed at Los Alamos was clearly justified. I don't think that ORNL scientists during the Weinberg era would have thought much of the original Hyperion concept, and I doubt they would be excited by the current concept. I favor small modular reactors, but think that ORNL during the Weinberg era, housed the best reactor shop that has ever existed.

Until a full-fledged LFTR can be built......I've often wondered about the possibility of hybridized fuel modification of an existing mini reactor like hyperion......during the short-term interim to use thorium hexaflouride......combined with some plutonium or americium or whatever to supply extra neutrons to make it go critical.This may be a difficult engineering challenge due to the small size of a mini reactor like hyperion.But then again,it may make for a quick and simple shortcut to a partial LFTR in the meantime until a full-fledged LFTR can be built.

I think we should all wish Hyperion the best of luck in their endeavor. If they succeed, they will hopefully set new precedents which can translate into a more inviting atmosphere for LFTR. Features such as modular construction, small staffing, below ground enclosure, and no pressure vessel are just a few of the commonalities it might share with LFTR. Yes, LFTR is completely different under the hood, but this has similar siting ambitions. As the NRC becomes more familiar with these concepts that will help pave the way for more innovation.