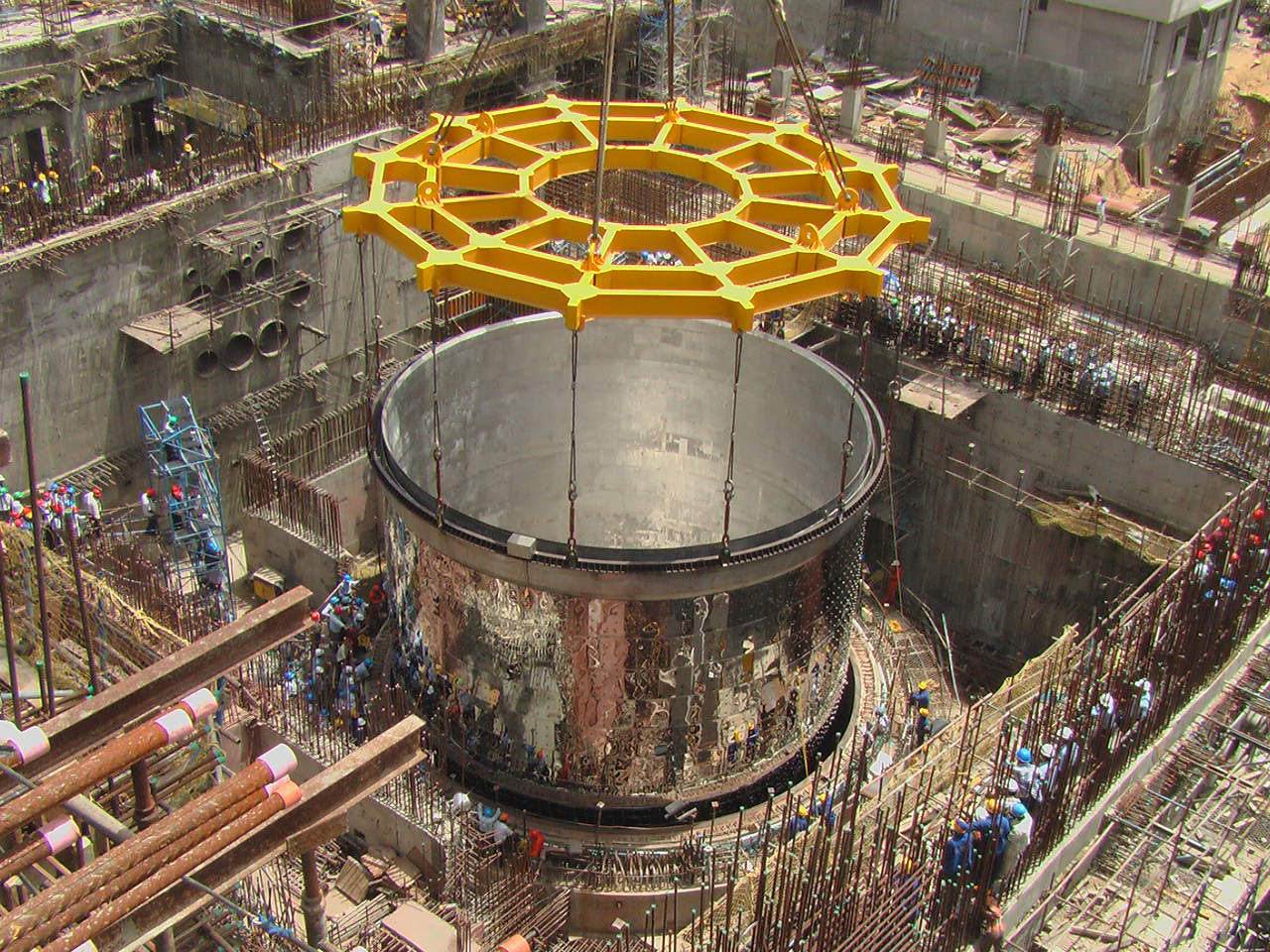 More evidence is emerging that the Nuclear Power Corp. of India (NPCIL) is planning to finance future nuclear construction through debt financing. Both local and international sources will be tapped. NPCIL plans to raise at least $6.5 billion from local sources, and another 3 billion euros from international lenders. Local funding will also include equity from NPCIL and at least three Indian partners. Three Billion is being raised locally to finance 4 locally designed 700 MW PHWRs. Another $3.5 billion is being sought to pay for 2 larger Russian PWRs to be built at Kudankulam. In addition equity financing for Indian Nuclear development is expected to come from Large Indian businesses, including the Oil Corporation of India, The National Aluminium Company, and NTCPL.
Indian nuclear developments could have an impact on global carbon emissions. Indian PricewaterhouseCoopers Pvt., Executive Director, A.V. Kameswara Rao, told Bloomberg,

Indian plans include the construction of as many as 14 Russian Reactors, partially financed by "soft loans" from Russia, and partially by funds from local sources. The Russian reactor projects are but a small part of the Indian nuclear plans which will eventually require vast financial resources for their completion.

Indian Nuclear plans are exceedingly ambitious and the Indians have started a huge infrastructure program. Bharat Heavy Electricals (BHEL), is owned by the Indian Government, and already supplies 80% of the heavy equipment for India's national nuclear power program. BHEL plans to spend $7.5 billion in two years building plants to supply components for both local and foreign designed reactors to be built in India, In addition, BHEL plans a further joint venture with NPCIL intended to supply even more components to for reactor construction, and is involved in a further joint venture with NPCIL and an as of yet unnamed European partner to build generator turbines for new Indian Reactors. A further BHEL joint venture with Heavy Engineering Corp (HEC) will produce castings and forgings for nuclear power plants, BHEL is also engaged in talks with British Sheffield Forgemasters International Ltd and Japan's Kobe Steel exploring the possibility of even more joint ventures for nuclear forgings. Still other joint ventures and agreement involving BHEL will be announced. All in all it appears that BHEL and NPCLI plan to invest $50 Billion during the next five years, to expand the Indian nuclear manufacturing base. This would be astonishing, but investment of this size are probably being matched by China.
The current indian plan calls for the construction of up to 40 GW of foreign reactors, in the next 22 years. Although India has developed excellent nuclear technology, will use the foreign designed reactors to jump start the expansion of the Indian post-carbon power industry. In addition, the purchase of foreign designed reactors will provide India with a stream of reactor uranium. The uranium plays a major role in future Indian nuclear plans. The so called nuclear waste from the India's foreign designed Light Water Reactors will play a critical role in India's nuclear future according to current Indian plans. NPCIL plans to use plutonium from the light water "spent fuel stream" to fuel its new generation of Fast Breeder Reactors, which will in turn transmute thorium into the U-233 that will power the next generation of Indian Light Water Reactors.
Now contrast these and many other documented Indian developments with the following statement from nuclear critic Steve Thoma, and his associates Mycle Schneider, Antony Froggatt, and Doug Koplow,

Considering its poor past industrial record, it remains to be seen whether the Indian nuclear sector will be up to its own expectations in the future. Foreign assistance could make a difference to some extent. . .

In other words, "those poor darkie Indians don't have a clue about what they are doing with nuclear technology. They need all of the help they can get." This statement was commissioned by the then Green dominated German Federal Ministry of Environment, Nature Conservation and Reactor Safety. Who says that the spirit of Nazi racism is dead in Germany?
It is clear then that the India Government plans to become a global leader in the peaceful uses of nuclear power, and sees nuclear technology as its preeminent tool in that struggle. While India advances its capacity to produce a post carbon energy sector, it is also laying the groundwork for a revolutionary change in the lives of hundreds of millions of its people. and for India to become one of the great powers of the 21st century.
Posted by Charles Barton at 9:12 AM

Sweden will probably not participate directly in reprocessing for its own use for at least decades. We have alum shale uranium deposits; they're low grade but they contain an enormous amount of uranium, vanadium, nickel and molybdenum, so I do not believe our spent fuel is vital for our future.

Although we don't have nearly enough "waste" to satisfy the Indian desires it would be nice if we could offer to allow the Indians to reprocess our spent fuel under some set of preconditions.

I imagine a deal along these lines: the indians extract all actinoids(including bulky uranium-238), leave all the fission products; the indians would vitrify the waste into a fission laden glass and return it in a container designed by or studied and approved by Swedish SKB for very long above ground storage. With sturdy enough containers it could be stored above ground for a few centuries. The glass could then be processed to get at the platenoids and other useful isotopes. The only actual waste at the end of this process is a small volume of very long-lived fission products that may not have any commercial use(who knows the value of technetium-99 in 300 years?).

What Sweden would get out of this deal is that it doesn't need a large, long-term geological storage project. Geological waste storage is a white elephant; it is unimaginable to me that we will allow such riches to stay burried for more than a century or two before digging them back up again.

If you understand the meaning of half-life, a little reflection will show why this must be so.

The demand for multi-thousand year storage is just a way of driving up the costs of nuclear to discourage it.

The article uses the word ambitious.

When the last time you heard that word applied to anything, let alone nuclear power, done in the developed world?

We need to stop being servile to our economic religion. Follow the Indian example: set goals for society, and harness all our tools, including economics, to take us there.

CRF is correct. What is common about countries really engaged in nuclear energy deployment is the goals they really set for themselves: S. Korea, China and India. I expect Vietnam as well. These projects become points of national pride. When the design the goals they are *serious* in their expansiveness and usually involve concurring development of a vertically integrated component infrastructure industry as well, where the real, permanent jobs are too.