Welcome to The Fourth Carnival of Nuclear Energy. Today we feature a freaks show currently being staged in Vermont, but our carnival has many other attractions. 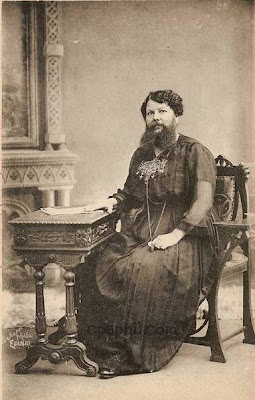 The town of Vernon, Vermont has recently been subjected to an anti-nuclear freak show, and following up on a suggestion by Robert Hargraves, "Yes Vermont Yankee's" Meredith Angwin contemplate a Vernon secession from Vermont , as a solution to the Vernon Freak Show problem. The freaks include Australia's Helen Caldicott (pictured at right), The freaks want to shut down the Vernon based Vermont Yankee power plant, pointing to a few drops of not very radioactive tritium, and a fish that likely became radioactive due to ingesting fall out left over from a 1950's nuclear test.
"Yes Vermont Yankee" recently staged a Caldicott Contest, to demonstrate a Caldicott type take on other technological menaces to human life. One contest participant

Joffan pointed out that single paper cuts were painful, and yet paper is sold in 500-unit packs. Therefore, thousands of people world-wide must be dying from multiple paper cuts.

Rod Adams also discusses the Vermont anti-nuclear Freak Show problem.
Despite, the ruckus raised in the Northeast by the anti-nuclear freaks. would wide the long term prospects of nuclear power appear good. Dan Yurman of Idaho Samizdat reports that Luis Echávarri, (right) director-general of the Paris-based Nuclear Energy Agency (NEA) has indicated that between 600 and 1400 reactors could be operating world wide by 2050.
Mark Flanagan of NEI Nuclear Notes, offers us a look at the DoE's latest Oak Ridge based program to use supercomputers to improve nuclear power generation.
Jason Morgan of Nuclear Fissionary offers us an account of US Government Loan Guarantees for New Nuclear Construction.
Sterling Archer at Nuclear Archer offers us a discussion of the possible use of Superalloys in Generation IV nuclear power plants.
No doubt Helen Caldicott would have warned the Sovietologist (Edward Geist), that a trip to Chernobyl would prove deadly. The Sovietologist is highly regarded by his blogging peers, although due to the pressure of dissertation research in Russia, he has been out of combat recently. However, he broke his silence to breavly announce that he is going on an excursion to Chernobyl. We look forward to his report if he survives the trip.
Brian Wang reports on recent developments related to nuclear power in Russia, Japan and Brazil.
Every carnival should feature fireworks, and our fourth carnival offers one heck of a big explosion, this one underground. Favius Maximus is not, strictly speaking a nuclear blog, but Favius suggests, Let’s seal the Gulf oil well by using atomic weapons! This suggestion is not exactly original, The Soviets tried it to control o natural gas related fire a long time ago. ,
Blasts from the past
We not turn from Facius Maximus's proposal to solve the Gulf of Mexico oil leak with one heck of a big future blasts, to a different sorts of blast from the past. Blogging is something of an instant communication form. People who read blogs regularly know, that every now and then, bloggers create significant and even outstanding contributions to our knowledge of our times. "Blasts from the past" offers a look at some outstanding posts from bloggers who write about nuclear energy.
David Bradish's 2008 deconstruction of Amory Lovins was perhaps one of the most significant accomplishments of the nuclear blogging community. Bradish wrote a 6 part series on Lovins. Part 6 of the series both Bradish's previous arguments and proceed to demonstrate how mistaken Amory Lovins often stated view that

Bradish both links to his 5 previous posts, and to numerous posts on Lovins by other blogger. Bradish's posts on Lovins were sufficiently effect to draw Lovins out for a two round debate on Gristmill. Lovins first Gristmill post brought a spirited response from members of the nuclear blogging community including Bradish and Brian wang. While Lovins stated in his second Gristmill post that he intended two write at least two more posts, he in fact offered no responses to the comments which followed his post and the promised two further posts never appeared. David Bradish simply destroyed Amory Lovins credibility as an energy analysts, and Lovins was unable to mount a defense.
A second demolition of nuclear critics came from Bill Hannahan in the form of two January 2010 posts on Nuclear Green. Hannahan had written a critique of a famous Mark Z. Jaconson paper on wind reliability. Bill's had significant problems getting his paper published, as he noted in one of his two posts on Nuclear Green. Bill's original paper was titled "Can interconnected windfarms replace baseload power plants?" Bill did an outstanding job of demonstrating the flaws in Jacobson's arguments, and any nuclear blogger who comes up against anti-nuclear arguments that use Jacobson's claims about wind reliability, should refer to Bills paper.
Our third blast from the past comes from Rod Adams. I consider Rod the dean of nuclear bloggers. In 2007, when I started to think about factory manufacture of reactors as a means of lowering nuclear costs, I quickly realized that factory built reactors would have to be small, in order to facilitate their transportation outside factories. I Googled small reactors and out popped a piece on economies of scale Rod Adams had written in 1996! "This Adams guy is smart," I thought, and so he is.
Rod, was not the first person to see advantages to the small modular nuclear reactor approach. Kirk Sorensen, of Energy from Thorium has demonstrated that in the mid 1960's Oak Ridge National Laboratory reactor designers were engage is working out the design of a nuclear plant housing 4 small 250 MWe Molten Salt Reactors. Kirk has copied old ORNL research reports, that demonstrate exactly how advanced thinking was at Oak Ridge in the 1960's. Not only are the reports interesting, but they also contain attractive, detailed drawings of reactor designs.
Finally, retired nuclear physicist and nuclear arms control expert Alexander DeVolpi is seldom mentioned in lists of Nuclear Bloggers. DeVolpi actually does not blog, he knols. Knols ar small, essays, on specific subjects, that are written as contributions to human knowledge. DeVolpi; Knols are required reading for anyone who wants to intelligently discuss nuclear proliferation issues. DeVolpi's Nuclear Scorboard, deftly sumerizes objections that have historically been made against nuclear power, and the facts that are known today.

Finally our carnival offers us a cartoon, Thor makes an Ice cream run:

The cartoonist Pyar Anderson makes a nuclear related point with his cartoon:

Heavy investment in Thorium energy would staunch the energy crisis, blunt the fears of nuclear proliferation, reduce nuclear waste, and conceivably put nuclear power in vehicles, even. Thor knows it. To get the quick digest version, check out this Wired article. To go more in depth, check out Energy From Thorium and This Week in Nuclear. If I had a million dollars, I’d drop it into Thorium energy development. This is the magic bullet.

Posted by Charles Barton at 7:35 AM