China and Belgium Sign Agreement On Development of Plutonium Fuels. 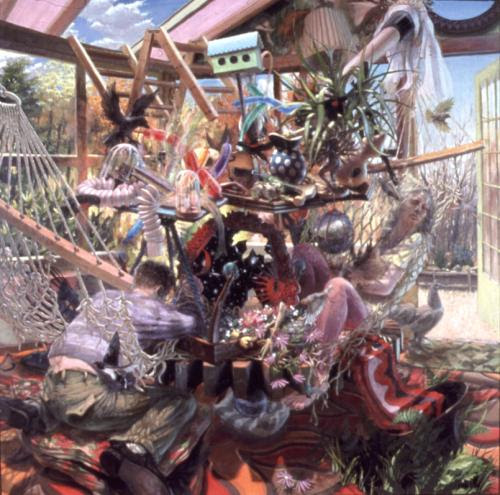 Cross posted from Daily Kos, with an amusing poll, but without the artwork.

Only three nuclei have been used commercially in fission reactors. The most commonly used of course, is uranium-235, which represents, depending on the source of uranium ore about 0.7% of natural uranium. Without this the presence of this isotope, the commercial use of nuclear energy would have more than likely proved impossible.

Only about 12% of the uranium-235 that was initially present at the time the earth formed is still present. About two billion years ago, the concentration was still high enough that natural nuclear reactors occurred in certain sandstone formations around the world, most famously at Oklo in Gabon in Africa. These historical reactors have given much insight to the behavior of radionuclides over billions of years. The geological behavior of technetium, for instance, can be inferred from the distributions of the ruthenium isotope into which it all decayed.

In modern times, with the exception of the wonderful CANDU (PHWR) reactors, most reactors require enrichment of the relative proportions of U-235 in natural uranium, raising the percentage to about 3%.

Enrichment is a controversial matter, because it is certainly one technology that is really useable either for peaceful or war-like purposes, although, for all the carrying on about the subject, only one nuclear war has ever been observed - it actually started as an oil war, at least where the nukers and the nukees were concerned - and it ended 65 years ago.

Some people point to the limited supply of U-235 and start in with "peak uranium" talk. It's nonsense, actually.

I personally regard nuclear enrichment as an unnecessary technology, although some would argue - selfishly I think - that it is the most economic approach to using nuclear energy.

Another isotope that has been used commercially - the rarest of the three - is uranium-233, which is obtained by transmuting thorium-232 by bombarding it with neutrons in a reactor core. If the reactor produces more uranium-233 from the thorium than it consumes of other nuclei, the reactor is a breeder reactor. Uranium-233 is the only fuel that can operate as a breeder reactor using so called "slow neutrons," that is neutrons whose kinetic temperature is about 298K, room temperature on the Kelvin scale. Actually "slow" neutrons have a speed of nearly three kilometers per second, roughly in unfortunate English units, about 16,000 miles per hour!

The first commercial nuclear reactor in the United States, the reactor at Shippingport, PA, operated for one fuel cycle as a breeder reactor using U-233 that had been prepared under the supervision of the great American physical chemist Glenn Seaborg. This took place in the late 1970's, and the occasion was important enough that President Jimmy Carter participated in a ceremony in which he switched the reactor on (figuratively of course) from the White House.

There has been much renewed interest in thorium cycles around the world, now that the anti-nuke faith has been consigned to the intellectual waste heap where it belongs, in recent years. The Indian nuclear power program, which may soon assume a position of world leadership, is heavily invested in the use of thorium, since it has enormous reserves of this element and only tiny reserves of uranium.

The third nuclear cycle is the second largest fuel cycle in the world in current use, the plutonium cycle. The isotope used commercially - usually mixed with the 240 isotope - is plutonium-239. I regard another isotope of plutonium, plutonium-241, as very valuable, but unfortunately this isotope which has a half-life of only around 13 years - is most often wasted. Although I am something of an iconoclast even in nuclear circles on this point, I strongly support plutonium cycles, since I'm not very fond of mining. With a plutonium cycle, uranium already mined, and thorium already mined, could support world energy demand for several centuries. Indeed, the depleted uranium that exists in the United States is sufficient to meet the world energy demand for about 80 years.

The plutonium cycle has been commercial for several decades now, even though Jimmy Carter claimed that commercial application of this cycle would inevitably lead to nuclear war. He was wrong on this score, and even a cursory examination of the technological points of the matter that should have been obvious even in his times should have easily shown as much. The United States nevertheless because of Carter's policies, abjured plutonium recovery from used nuclear fuel, but, disregarding Carter's self proclaimed "moral example" Britain, France, Russia, China, India, and Japan have all operated chemical plants to recover plutonium from used nuclear fuel.

China, India, and Japan all have relatively new plutonium recovery plants, although arguably none of them have advanced beyond very primitive chemistry - known as the "Purex" (Pu extraction) process - for doing such recovery. This is solvent extraction. It's not terrible, but saying that something is "not terrible" is not the same as saying it's "good."

The following nations have used plutonium recovered from used nuclear fuel to fuel commercial reactors: France, Belgium, Japan, Russia and Germany. Only one of these nations ever participated in a nuclear war - in receipt and not delivery - and that was before a single commercial nuclear power plant existed anywhere on earth.

Belgium uses plutonium obtained from France to manufacture nuclear fuel rods. These rods are called "MOX" rods, for mixed oxide fuel, and they contain a mixture of plutonium and depleted uranium.

China has committed to build 200 nuclear reactors - about twice as many as we now have operating in the United States - in the next twenty years, and now has 24 under construction, having started a new one a few weeks ago after commercially certifying another last month.

The new Chinese nuclear fleet will be very technologically diverse, and will be able to use many variations of nuclear fuel. This is a good thing, not a bad thing. China intends to recover 100% of the energy in all of the uranium they have: There will be no such thing as "depleted uranium" ultimately in China. The Chinese are committed to having a closed nuclear fuel cycle.

To evince their seriousness on this point, they have just signed a deal with Belgium to expand their indigenous capability in this area.

Here is a news item on the subject:

MOX plant and Myrrha in Sino-Belgian deals
07 October 2010
China and Belgium have signed a framework agreement on the construction of a pilot MOX fuel fabrication plant in China, and a research collaboration agreement covering developments in the Myrrha hybrid research reactor project.

The framework agreement signed in the presence of the Chinese and Belgian prime ministers, Wen Jiabao and Yves Leterme, defines the context for construction of a pilot plant to produce mixed oxide nuclear fuel (MOX) and for the use of MOX in Chinese nuclear reactors. A commercial agreement including technology transfer and technical assistance could soon follow, according to Belgian partners Belgonucleaire, SCK-CEN and Tractebel. The plant would be built by the China National Nuclear Corporation (CNNC) with the support of the Belgian companies.

Belgium has a wealth of experience in MOX fuel development and production dating back to 1960, including 20 years of industrial MOX production at Belgonucleaire's 35 tonne per year Dessel plant from 1986 to 2006. MOX has been in use in Belgium's nuclear power plants since 1995.

China's nuclear plans would see it operating about 200 large reactors in 20 years time, and it wants to limit the amount of imported uranium required to support them. For that reason it is very keen to 'close' the nuclear fuel cycle by reprocessing used fuel to recover useful uranium and plutonium and then to recycle the plutonium in MOX. Reprocessing and recycling have the other benefits of greatly reducing the volume of high-level radioactive waste for disposal and of preparing and packaging that smaller volume at the same time.

China opened a 50 tonne per year pilot plant to reprocess used nuclear fuel in 2006, and the next year signed an agreement with France's Areva to look into the feasibility of building an 800 tonne per year reprocessing plant in Gansu province, employing advanced French technology and operated by Areva.

The Chinese nuclear power program plans to produce more nuclear electricity than the United States produces electricity from all sources within 40 years.

They will nearly match US nuclear production within ten years.

I would argue that Chinese technology now under development will make it possible for them to phase out coal burning way before the Americans could even dream of doing so.

(The following comment was something I added in the comments section of the Kos post, in response to former IFRer Bill Mosby. The comment was titled "China has just agreed to purchase two LMFBR from Russia.")

From my perspective, these, LMFBR, are not ideal fast reactors, but some have been moderately succesful, including the old Soviet BN-350 which operated about 30 years in Kazakhstan.

I believe France should have restarted the Superphenix, but again, political issues trumped scientific and technical issues.

I expressed my feelings on LMFBR in a series on India's plans for this set of reactors, the last of which is here:


I like the IFR and was sorry it was canceled. Some of my friends in the online nuclear community don't think much of it, and want to go to liquid fluoride thorium reactors. The chief benefit of the program was its approach to reprocessing which was, in fact, very interesting, and certainly worth further consideration.

I like fluid phase reactors and believe they are probably ideal in many ways. They are part of the Gen IV program. But I don't really object to other types of fast breeder reactors. All that said, I believe that as much of the world's existing nuclear infrastructure as is possible should have thorium in the core, because a rapid scale up of nuclear energy such as required to save humanity will require that.

This is the sort of plan I'd like to see:

Take the plutonium from spent LWR fuels and use it only to start fast reactors, no MSRs. These fast reactors should be designed to have a fairly high breeding ratio. They are merely break-even in plutonium production, with surplus neutrons going into making U-233 in a thorium blanket.

Once LFTR gets off the ground, don't make any more once-through power reactors of any type, because it takes less U-235 to start a LFTR than a power reactor, whether CANDU, LWR or anything else.

Use a combination of mined U-235 and bred U-233 from fast reactors to start up LFTRs.

This combines the high breeding ratio attainable in fast reactors with the low specific inventory attainable in a LFTR, since all the surplus fissile material goes towards LFTRs.

This gives you the flexibility of having a first generation of LFTRs which are merely break-even if this allows a simpler, cheaper, easier to verify design to be used.

Fast reactors are much better at disposing of TRU wastes than thermal reactors since the cross section for neutron capture is smaller relative to the cross section of fission for fast neutrons. When more fissile inventory is no longer needed to power the world, at some unspecified time in the future, you can either operate the fast reactors as iso-breeders without making a lot of americium or curium that has to be disposed of in a geological depository, or you can operate in burner mode to dispose of the plutonium, americium and curium and shut the reactors down in favour of LFTRs.

I prefer keeping them running, since there's no reason to discard the 1/4 of naturally found actinides represented by uranium.

To be a little more fair to the BN800, you don't have to go back to the BN350, the BN600 is the prior design and has operated since 1980. There is often the attached comment that it has the best performance record of all Russian reactors. They are also building a BN800 in Russia that is scheduled for completion in 2012, so the Chinese reactors will not be first-of-a-kind.