Why Renewable Energy is so Expensive, While the Molten Salt Reactor is so Cheap

Sometimes the most important information comes from seemingly boring sources. Scholars are said to have the souls of ants because they look at seemingly boring material. But sometimes that boring material yields interesting and useful information that tells interesting stories. If interest is based on how much the story will effect the life of the reader or the life of every human being who lives on earth, then this story should be of considerable interest.

Vestas Wind Systems, is a Danish wind turbine manufacturer. In January 2011, Vestas published a report titled Life Cycle Assessment of Electricity Production from a V112 Turbine Wind Park. Within this report's boring and tedious pages are found some of the deepest secrets of the wind industry. "Life Cycle" contains a detailed account of the materials inputs for a 100 MW wind farm. The 100 MW is a nominal rating based on the use of 33 Vestas V112 wind generation systems in a theoretical facility. Each V112 is rated at 3 MW, although its actual output will varie from 0% to 100% depending on wind conditions. Average V112 output can also varie with location.

There are other significant material inputs into the V112 installation including Aluminum (total 208 tonnes per facility) and Copper (total 176 tons per facility).

Now lets look at another renewables technology, Solar PV. I looked at, A Review of Risks in the Solar Electric Life-Cycle, by V.M. Fthenakis and H.C. Kim of Brookhaven National Laboratory. Those writers reported drawing on date reported by Mason, J. M., V.M. Fthenakis, T. Hansen and H.C. Kim, in "Energy Pay-Back and Life Cycle CO2" Emissions of the BOS in an Optimized 3.5 MW PV Installation. Progress in Photovoltaics: Research and Applications, the report materials input for 1 MW on nominal PV generating capacity. These include 40 metric tonnes of steel per MW, 19 tones of Aluminum, 76 tons of concrete, 85 tonnes of glass, and 13 tons of silicon.

The Wikipedia reports capacity factors of from 12% to 19% for solar PV instalations. This would yield between 120 and 190 kWs of average output for every 1 MW of installed PV power. This would require an input of between 333 and 210 tonnes of steel and between 633 and 400 MT of Concrete per MW of average electrical output. The input of other material into the Solar PV instalation would be equally impressive.

Discussions of the future of energy should focus on costs and resource availability. Switching the world energy system from fossil fuels to post carbon energy technology will be a massive undertaking, that will require huge inputs of materials and labor, whatever energy technology is chosen. Yet the choice of technology is important because the cost of labor and materials inputs matters. Per Peterson illustrates the problem by a comparison of some material inputs for various nuclear technologies: 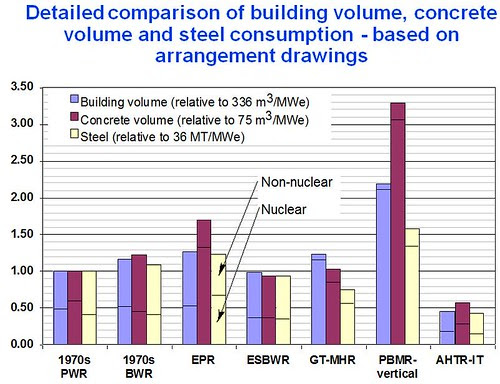 PBMR is a gas cooled Pebble Bed Modular Reactor while AHTR-IT refers to a molten salt cooled graphite moderated reactor that could use pebble bed technology. Peterson's graphic nicely demonstrates why Pebble Bed Technology, once viewed as very promising has ceased to be viewed as an important nuclear option. Yet pebble bed research has not been entirely wasted. Professor Peterson believes that all of the materials input problems of Pebble Bed Technology. AHTR-IT refers to molten salt cooled graphite moderated reactors that have similar featurs when compaired to MSRs.

In "Metal And Concrete Inputs For Several Nuclear Power Plants," Per F. Peterson, Haihua Zhao, and Robert Petroski of the University of California, Berkeley, reviewed the concrete and steel inputs requirements of several nuclear designs. They stated,

Peterson and his associates stated that,

Peterson and associates explain the AHTR,

Peterson estimates that the steel and iron input for a 1235 MWe AHTR facility to be around 19348 tonnes of metal with some where between 10% and 20% being non ferrous metals, or about 16 MTs per rated MW or 18 MTs per MW of average output. Concrete input would be 184354 cubic meters. Which comes to somewhere close to 424000 MT of concrete, or 343 MT per rated MWe, or around 380 MT of concrete per average MW of output.
The AHTR sufficiently similar to MSRs in design to argue that its material inputs would be similar to that of AHTRs. It should also be noted that Per Peterson and his associates did not consider this concrete and steel savings proposal. Namely that MSRs, be located in recycled coal fired generation facilities. We have no detailed studies of the benefits of the recycling approach would be, but if we assume a saving of 25% of ferrous metals and concrete. That leaves us with 285 MTs of concrete and around 13.5 tones of metal input per average MW of output.
At least one additional "trick" can be used to lower the materials input into MSR installations. The "trick" involves the use of underground housing of the reactor core. Above surface reactor installations require massive concrete and steel outer shielding structures, while such structures add no protection to an underground housed core, and thus are unneeded.
The AHTR derives its advantage from its materials advantage from its compactness. Peterson and his associates compared their AHTR design to the ESBRR, a generation III+ reactor. The ESBWR facility occupied 485477 cubic meters of building space compared to 184354 cubic meters for the AHTR. We can assume that the relationship will be similar for MSRs and ESBWRs.
We began this story with an account of the materials inputs for Wind and solar PV installations. There is a flaw in that story as we have told it so far. Both Wind and Solar PV are variable and do not provide energy on demand. With such unreliable energy sources balancing from other energy sources. I recently noted that a recent IER publication Harnessing Variable Renewables: a Guide to the Balancing Challenge. A discussion of that publication in offshoreWIND.biz tells us,

The resulting analysis shows that each region has the technical resources to balance large shares of variable renewable energy.
Potentials range from 19% in the least flexible area assessed (Japan) to 63% in the most flexible area (Denmark). The IEA also assessed the resources of the British Isles (Great Britain and Ireland together), 31%; the Iberian Peninsula (Spain and Portugal together), 27%; Mexico, 29%; the Nordic Power Market (Denmark, Finland, Norway and Sweden), 48%; the Western Interconnection of the United States, 45%; and the area operated by the New Brunswick System Operator in Eastern Canada, 37%.

Most of the balancing resources will be carbon dependent. Thus the stable, reliable grid will continue to draw somewhere between half and two-thirds of its electricity from carbon emitting sources, if we exclude nuclear power. The only alternative to nuclear that will put us close to the carbon control 80% carbon reduction goal climate scientists say we need in order to prevent massive climate disruption, would be the the introduction of some form of energy storage. What ever form of energy storage will be chosen it will require materials input and will cost money, thus increasing the cost of renewables energy, without adding to energy output gain.
Thus the MSR and similar technologies represent reliable and low cost energy technologies, that should successfully compete with renewables on both reliability and cost. Our exciting conclusion to an otherwise dull story is that by potentially shifting to Molten Salt Nuclear technology, we can save the planet, while also saving a vast amount of money.
Posted by Charles Barton at 4:02 AM

Interesting post once again! Thank you Charles! Incidentally I was studying similar things before I read your post.Regarding storage.... http://en.wikipedia.org/wiki/Andasol_Solar_Power_Station

Andasol CSP stores energy in salts for 7.5 hours and seems to require 700 m^3 of salt/delivered MW. The price of sodium and potassium nitrates seems to be such that this amounts to around 1 million euros/delivered MW or about 1.4 million dollars/delivered MW. So the cost of storage salts (for 7.5 hours) would add around billion or on materials costs for CSP. In Andasol the cost for storage was around 50 dollars/kWh of storage.

Jani, than you for the reference. Do you have data on total materials inputs for CSP?

No, sorry. I couldn't find that out yet properly. However, if material requirements are to be in the same ballpark as those for conventional nuclear, there should be no more than around 2 kg of steel/m^2. Materials are not entirely similar of course, but 2kg sounds very low to me. So I am 99% sure that once we find the CSP figures, they will, as usual, turn out to be much higher than for nuclear. That is the cost you have to pay for relying on diffuse energy source.

Charles, can you do a simple chart like this:

And the one with Capacity FACTOR figured in?

Of course the other thing that adds to the costs of solar and wind power, is the simple fact that they are, by definition, exposed to the elements. Normal power plants operate in constant environment and this tends to make it easier to engineer them for long life time. Solar and wind are exposed to heat, cold, water, dust, wind, maybe salt... While it is in principle possible to engineer them to last for 60 years, this will most likely add to the costs. As far as I remember, wind turbines today have a life time of 20 years and solar power plants about 25 years.

I just had an interesting thought with reference to LFTR type reactors where the fissiles are in the salt, enabling load following.

The act of load following necessarily reduces your capacity factor, because your plant does not have to produce at 100% all the time. So, a 200MW plant may only produce, say, 150MWy in a year, because in the winter months there just wasn't that much demand relative to the summer. Or something.

That would give the plant a capacity factor of 75%, completely unrelated to fuel supply or actual capacity, but tied only to demand.

That's something to think about when talking about the ratings of these things.

Charles Barton has addressed this issue in his previous postings were he has proposed reactors made with less expensive materials that have more limited life in reactor-hours, but would good candidates for use as peaking power plants where operating hours are limited.

It may make sense to have a mixture of base load and load following plants, each type optimized for its mode of operation.

Your post is most interesting because it brings several diverse sources together. Good job.
I am disappointed with Dr. Peterson for not including the AP1000 in the chart of materials used by reactor. After all, the AP1000 is being actively built in the United States and China. The AP1000 uses passive safety to reduce the site size to 2/3 of the 1970 designs which would reduce material usage. How much reduction? I don't know. Does anyone know the material usage for an AP1000?

Martin what we can do from published sources is limited by what others publish, or wish to have known. Westinghouse may regard AP-1000 materials input as a business secret.

Amount of metals use per MW average for my location (The Netherlands) and comparing CSP in the Sahara desert isn't any better:

CSP in the desert is around 600 tonnes metal per MW average, using troughs.

With modern light water reactors at 30 tonnes metal per MW average, this means CSP uses 20 times more metal input, even if the CSP plant would last as long as the nuclear plant.

These are the kind of facts that made me change my mind about nuclear power...

Nice analysis of the costs and benefits associated with these techniologies! You can write about these topics on http://topiclog.com and reach more readers.