I usually defer the analysis of solar energy costs to the esteemed Dr. Buzzo, but this weekend I came across a Solar array data set on The Gristmill, to which which  commenters had applied useful and illuminating analyzed on this usually very dark subject. The data was on Navada Solar 1, a 64MW CSP facility completed last year. The Nevada Solar 1 site covers 400 acres, and was completed last year at a cost of over 260 million dollars. Nevada Solar 1 was upon completion the third largest solar generating facility in the world. Gar Lipow discussed Nevada Solar 1, in a May 21 post on Gristmill, in which he reported that Nevada Solar 1 produced 134,000,000 kWh in a year. Such statement are typical of renewable supporters, big numbers that hide inefficiencies and costs. Lets brake the 134,000,000 kWh figure down. Assuming 8 hours a day of useful sunshine, Nevada Solar 1 averages producing 45 million KWh. This gives us a 23% capacity factor. A link which Lipow supplies tells usthat the Nevada Solar 1 facility cost more than 260 million to build. 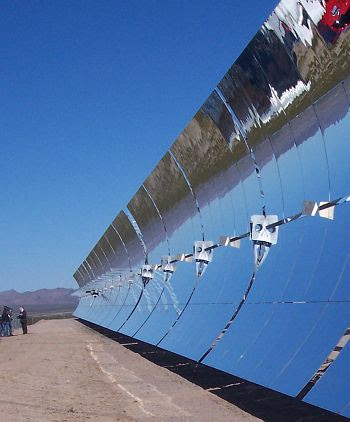 We now have some data upon which to build an analysis. In a comment on Lipow's post Skeptico noted that the Navada 1 plant cost over $17,000 per kW.

Lipow responded "If you look at costs over 20 years and include interest and O&M that is a cost somewhere between 10 and 12 cents per kWh - not an unreasonable cost for peaking power."

Sean Casten asked, "How do you get 10 - 12 cents from these numbers? added, that assuming a reasonable 10% rate of return on the $260 million, "[p]aying off that money requires a $30.5 million/year annuity. On 134 million kWh, that equates to 23 cents/kWh, and is before including any maintenance or operating costs, or returns above capital recovery. Drop the rate to 5% (e.g., absurdly low) and you're still looking at 16 cents/kWh."

Sean Casten repeated his question, "How do you get 10 - 12 cents from these numbers?"

Lipow responded with one word, "Subsidies."
Ah ha, we have some light!

In a June 14 comment on Gristmill, Gar Lipow accused Skeptico of using a dishonest argument, because "Skeptico took the kWh per year, treated them as baseload, and calculated capacity based on treating a peaking plant as a baseload plant." Lipow's accusation is strange because solar advocates seldom refer to solar plants as limited to peak load, even though that is largely the case, Lipow had not mentioned the words "peak load" in his May 21 post.

I looked at this particular plant because it happens to be the most recent plant. But it is only 64 MW - tiny and not able to grab the full economies of scale needed for CSP. . . . But CSP of 300 MW or greater is normally considered to pen out to a levelized cost (with interest) of 9-12 cents per kWh."

Lipow offered as proof of this a link to a pamphlet on CSP from Sandia Lab, which claims:

Thus we have a total disconnect between the the theoretical world inhabited by Lipow and Sandia scientists, and the empirical world of Nevada Solar 1. Lipow's sole excuse for the disconnect isfound in the words "economies of scale." No case for cost lowering through economies of scale is laid out.

Another issue emerged from the same discussion on June 14 discussion. Nucbuddy noted a growing controversy on water use by desert solar facilities. Nevada Solar One near Boulder City uses 400 acre feet of water for 64 megawatts of power. Nucbuddy also notes that the $260 million cost of Nevada Solar1, does not include the cost of electrical transmission lines.

We now have enough data to do an initial comparison between Concentrated Solar Power and nuclear power. If Nevada Solar 1 were scaled up to produce the equivalent annual electrical production of a AP-1000 nuclear plant. Our solar power plant would occupy about 42 square miles of desert, and would cost $17 Billion. Overnight storage of heat, electrical transmission lines, and interest would carry additional costs. Our 1 GW solar facility would annually consume nearly 27000 acre feet of rare desert water.

In contrast, the two 1.7 GW Mitsubishi's Advanced Pressurized Water Reactor (APWR) Luminant Energy is planing to build at Comanche Peak are currently estimated to cost $5-6 billion each.
Posted by Charles Barton at 6:58 AM

Your post is a bit over the top even for you.

My local nuke Palo Verde Generating Station consumes 76 million cubic meters per year of "rare desert wastewater". I'm sure any thermal solar plant located in Nevada's El Dorado Valley will have no trouble getting all the waste water it needs from Las Vegas. As for transporting the power, the LA Department of Water & Power high tension lines from Hoover run down the middle of the valley.

Of course you are right that nuclear energy will generate power a bit cheaper than concentrating solar power will, but it is an interesting technology and deserves some modest support. Read some of the studies at

Mike, I am not quite sure how my post is over the top. All of my data came from published sources. Do you think I over interpret the data. If so. how? You data on the Palo Verde Generating Station suggest that nuclear plants use water at a somewhat slower rate than Nevada Solar 1 does per unit of power produced. You refer me to several theoretical studies on the economics of solar power. Those studies were not based on real; world experience. Since those studies were completed significant inflation has effected the construction costs of all power installations including CSP. Solar power advocates keep the same cost figures from the same outdated studies, while ignoring cost experiences in the real world.

While Nevada Solar 1 may use recycled city water, that will not be sufficient for the massive installations capable of generating tens and even hundreds of billions of watts of electricity which CPS advocates claim will spring up in the Southwest. While the existing grid might be capable of handling the power from Nevada Solar 1, it most certainly not be able to handle power from a hugely expanded desert based CPS industry.

It is, I would maintain, the advocates of Concentrated Solar Power who are and have been over the top for a long time.

Charles, it's not hard to imagine that scaling up CSP will result in some cost savings. And technology has improved since Nevada Solar 1 was built.

So $17 billion is probably an overestimate.

But until some new, and substantial, solar thermal plants are built, any cost estimate claiming radical reductions is a huge guesstimate and shouldn't be taken too seriously.

Robert, thank you for your comment, the inflation of construction cost will of course effect the cost of all power facilities. Perhaps there will be some economies of scale, but we are talking about huge facilities, whose very sized will be a cost factor. I had anticipated about 1 GW per 4 square miles. not the 42 square miles my calculations seemed to yield. The water use is also going to be problematic.